YOUR BROWSER IS OUT OF DATE!

This website uses the latest web technologies so it requires an up-to-date, fast browser!
Please try Firefox or Chrome! 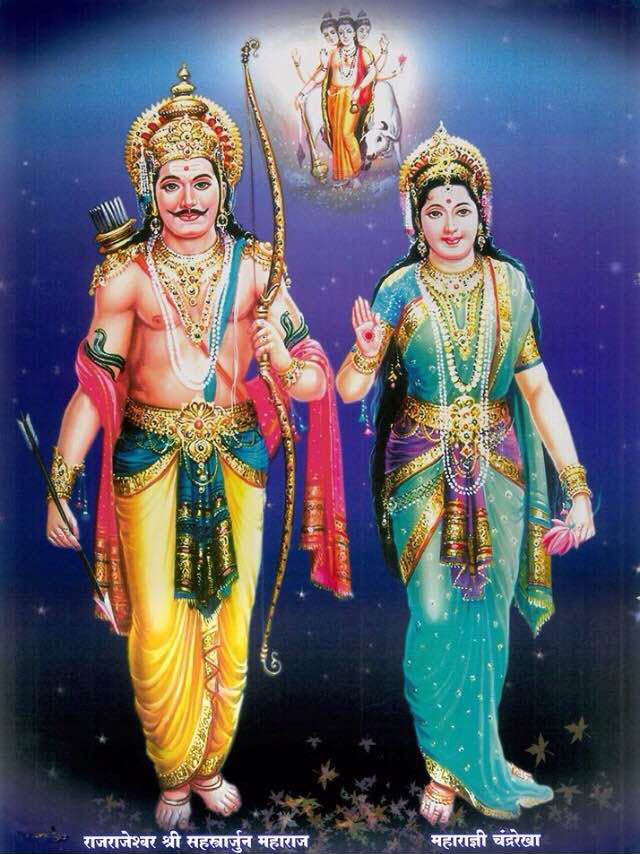 This article is presented to familiarize readers to our ancestor Sahasrarjun. His name is part of our community acronym Somavanshiya Sahasrarjun Kshatriya ( S S K). It is a common understanding among the SSKyans that the name Sahasrarjun refers to the emperor Arjun, who possessed a thousand hands. These hands were blessed by God Dattatreya for his deep devotion. His dedication is to protect the poor and weak subjects from the social outcasts/ adharmies. The word Sahasra virtually means a thousand. For many it means the dominance of emperor Arjun over the evil.

Great emperor Sahasrarjun, the patriarch, ruled the kingdom of Mahismati, the region of Maheshwar in the state of Madhya pradesh, India. He was a well-known Kshatriya warrior, who stood out of other brave heroes of puraans, for his great strength.

The King Krutiveerya was blessed with the son who was named as “ARJUN”. He was born at Maheshmathi on a full moon day. All the Devathas assembled and showered flowers and blessing. The moon was at his best because the entire Maheshwar was lit up with the brilliance of light. The kinners(musicians) were playing on the instruments. There was a festivity in the Maheshwar.

The King Krutiveerya bestowed on him a full attention when the child was growing. He was entrusted to the Rushis so that he could inculcate the qualities of a king who could serve his people with utmost care and devotion.

The town Maheshwar was much more beautiful than Indralok. Highly learned Rushi’s were residing there. Mention may be made of Mandal Mishra and an intellectual, and a Karma Yogi. He was an authority on Vedas, Sastras and Puranas. Even their maid servant would speak in Sanskrit language of which Mandal Mishra was an unmatched authority. There was hardly a learned Rushi who could match him in conversation and competition. One day Shankara Charya came to Maheshmathi and met Mandal Mishra. It was decided that both of them should enter into argument about the life and the purpose of creation of human life. The discussion continued almost a week. Mandal Mishra’s wife had prepared two garlands and they were around the necks of intellectuals.

When the garland around the neck of Mandal Mishra started drying up, she thought that her husband was about to be defeated, and hence she requested Shankara Charya to permit her to argue on behalf of her husband. Shankara Charya consented to her requested.

Her first question was regarding the relationship between husband and wife and giving the birth to children.

Being a Brahma Charya, Sankara Charya had no experience about the married life. He requested her to give him six months time to answer her questions for which she agreed.